In 2016, SIFEM invested USD 10 million in Renewable Energy Asia Fund II (REAF II), a private equity fund focused on investing in renewable energy products in South & Southeast Asia. REAF II invested in Mirkala Solar, now a 10 MW solar PV plant located in the western Indian state of Maharashtra. This solar project was an opportunity to turn a relatively harsh and almost barren landscape into a clean energy producing hub. Construction of the plant was completed in 2017, and in its first full year of operations, the plant performed slightly above expectations with 18.8 GW h of energy generated in 2018. A second phase of an additional 10 MW is in early planning stages. 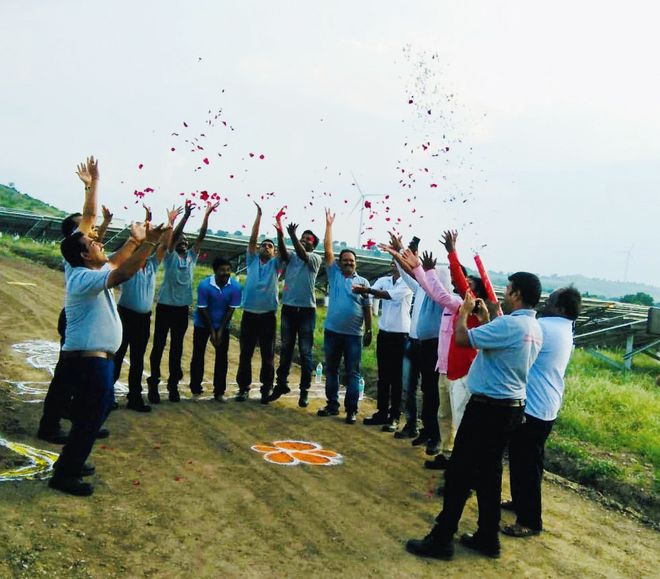 The Mirkala Solar plant is located near Rajpimpri, a village with a population of 3,000 located in the Beed District (population2.5 million) in the state of Maharashtra. One of the poorest districts of the state, 80% of Beed's population live in rural areas, the majority of whom live below the poverty line. The average annual income in the District is USD 789 (in comparison to the state average of USD 1,363), and the literacy rate is 77% (in comparison to the state average of 82%). In Rajpimpri, this drops to 68%. It is a highly drought-prone region, with scant and unpredictable rainfall. This further contributes to unemployment, and shortages of food and water. The scarcity of natural resources and a low consumer base hinder further development in this District.

The World Bank estimates that 200 million Indians lack access to electricity. Demand for electricity in India is set to double by 2040, propelled by an expanding population and rising incomes. With India's heavy reliance on coal, CO2 emissions will also increase substantially.

India is working towards an ambitious target of 175 GW of renewable energy installation by 2022; 100 GW of this is intended to result from solar power projects. Eleven per cent of the total nation-wide targets are the responsibility of Maharashtra State. India has enormous potential for power generation from solar energy. Maharashtra State has 250-300 days of sunshine annually, with high available average radiation rates. Mirkala Solar contributes to reaching these bold targets for increased capacity of renewable energy across India.

The Mirkala Solar plant is one of several renewable energy projects in the region jointly materialised by the project developer, Panama Renewable Energy Group (Panama), and the fundmanager, Berkeley Energy. Prior to the development of Mirkala Solar, two large wind projects were also completed, for a total of 152 operational MW. Mirkala Solar is located adjacent to one of these, Mirkala Wind. As a result, Mirkala Solar shares much of the physical infrastructure with the Mirkala Wind site, including access roads and the purpose-built grid substation at Rajpimpri. The two projects also jointly contribute to local community engagement activities.

Optimising the available land, Mirkala Solar uses seasonal tilt mounting structures, allowing three different angles to enhance the performance of the modules throughout the year. The plant directly contributes to the avoidance of 18,800 tons of CO2 emissions each year. As well as the installation of 35,660 solar panels for the first phase, the project included the construction of a 1.5-kilometre transmission line and a 33KV feeder bay at the substation in Rajpimpri. The energy produced will be channelled through the grid but sold directly to commercial and industrial consumers in Maharashtra, this helping them reduce their carbon footprint and secure their electricity supply. Mirkala Solar generates a positive impact not only by contributing to meet the rapidly increasing demand for power in Maharashtra, but also by doing so in a cost-effective, sustainable and reliable way.

A renewable energy project directly contributes to increased availability of electricity, but it also has numerous indirect outcomes which deliver positive impacts to the wider community. For example, the access roads built for Mirkala Wind also improved the quality of life in the surrounding villages. The improved road conditions allowed for increased access to markets for the local farmers, as well as to a secondary school which would otherwise be too far away. Direct employment opportunities are also generated for the local population during the construction of renewable energy projects. Approximately 100 jobs were supported during the construction process of Phase 1. Most of the workers were unskilled and hired locally. The services of a security contractor were employed for Mirkala Wind and are continued for Mirkala Solar. Local employees are hired from the surrounding villages and provided with training to support their tasks. In addition, the additional energy capacity for the region contributes to indirect employment support. Reliable and sufficient power enhances growth in the region, provides stability which protects jobs, and broadens opportunities for improved livelihoods.

A solar plant provides renewable energy which brings positive, sustainable impacts. However, during the construction and operation of the plant, both environmental and social factors must be considered in order to minimise any negative impacts. Panama carried out an in-depth environmental and social impact assessment for Mirkala Solar as part of the first steps for the project. Due to its proximity to the Mirkala Wind site, Mirkala Solar could utilise synergies not only in terms of physical infrastructure, but also with respect to community and other stakeholder engagement activities. Panama worked with local leaders to inform the communities about the project activities, land acquisition activities, safety measures and grievance mechanism. This also provided an open channel to receive community opinions and concerns. In addition, multiple community engagement activities have been implemented by Panama, including a renewable energy awareness programme for schools and the local community. Panama considers education around renewable energy and climate change to be a vital part of its projects. All the required land for Mirkala Solar was purchased from willing private landowners. No physical resettlement was required, only acquisition of some agriculture and grazing land. As there is scant vegetation growth in this region, the impact on fauna and flora was minimal.

A few kilometres from the Mirkala Solar plant, Balgram Orphanageis home to 90 children, ranging in age from 3 to 18 years. These children are either orphans or have been abandoned by their parents who were unable to provide for their children. The orphanage relies on donations from the public to operate, including for food and medication for the children. During the construction of the Mirkala Wind and Solar plants, the Panama Group and Berkeley Energy supported the orphanage with multiple donations, such as study desks, a water filter, solar lanterns, food, clothes, and sport equipment. To address the orphanage's challenge of limited electricity, Berkeley Energy and the construction partners of Mirkala Solar donated a 10 kW rooftop solar plant and battery bank. This donation provides continuous and reliable electricity to the orphanage, which in turn allows the children to study and use computers even in the evening.