Agruni Company Limited is a solid waste management company operating in Rwanda. It was founded in 2006, at a time when waste collection was not carried out systematically in Kigali. Instead, waste was mostly dumped in the street or in informal dumping areas. The founder of Agruni, Jean-Paul Shiraniro, saw a need for the systematic organization of waste collection in Kigali, and started to collect and transport waste from households with two ordinary trucks and 14 employees. 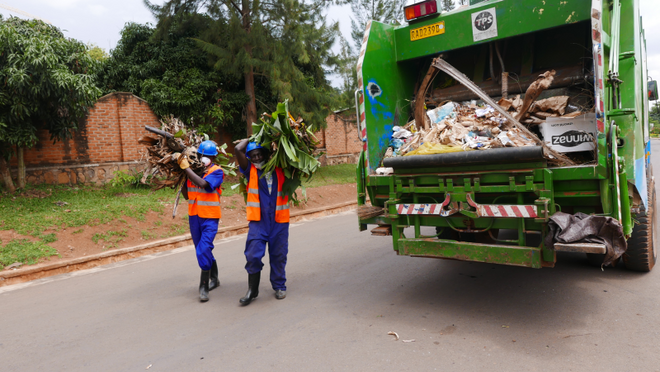 In 2017, more than 90% of Kigali’s population had access to a waste collection service, with Agruni representing more than 40% of the market share. Agruni now employs 220 people, has 42 waste collection vehicles, including 7 compactor trucks, and has expanded to other Rwandan cities. Agruni’s mission is to be part of the solution to the waste management issue; its contribution includes solid waste collection, processing and recycling, as well as the education of the public regarding proper disposal of waste and prevention of unnecessary waste.

Waste collection in Rwanda started after the 1994 genocide, although at a very small scale. As a result of the growing urbanization in Rwanda, and especially Kigali, the amount of solid waste generated has rapidly increased in recent years, reaching 300 tonnes a day in 2017. This has led to an increased need to better manage waste collection, sorting, and disposal. Between 2010 and 2012, the city attempted to enforce the sorting of waste at the household level, however the municipal waste disposal site did not have the facilities to process the different types of waste and the scheme failed at the time. However, Rwanda is working towards putting the necessary infrastructure and systems in place. The final disposal rate of waste in controlled waste disposal sites for other low-income countries is 50%, whereas in Kigali 90% of the city’s total waste is disposed of at the controlled site. Due to the largely agrarian economy, 70% of the waste is biodegradable, further emphasizing the opportunity for proper waste separation to reduce the effects on the environment. To the extent of its occurrence, waste collection in Kigali has traditionally been provided by the public sector, however since 2012, this service has been assumed by the private sector and overseen by the Rwanda Utilities Regulatory Authority (“RURA”). To enter the market, all private companies must obtain a license from RURA which allocates the collection responsibility of each suburb or village to the various licensed companies. Each client household pays for their own waste collection; the fee amount is according to the household income and distance from the waste disposal site and is collected directly by each company. In order to receive a license, the companies are required to provide appropriate wages and employment benefits and report to RURA on a quarterly basis, detailing the status of their cost recovery, service coverage, and waste separation operations.

The proper collection, transportation and disposal of waste is of utmost importance for the environment, the general health and living conditions of a population and is an essential contributor to the sustainable economic and societal development of a country. Agruni’s integrated approach includes waste collection from houses, restaurants, hotels and offices, as well as transportation,processing and recycling services.

IMPROVING SORTING PRACTICES
Over the years, Agruni has worked together with RURA to educate the population on proper waste sorting and separation practice. Whilst Kigali is now one of the cleanest cities in Africa, best practice sorting to allow for recycling – both at a household and professional collection level – is still a work in progress for Kigali. As a result, this is an area of continued focus for Agruni in the future.

IMPROVING COLLECTION PRACTICES
Agruni has been able to gradually replace its old open waste collection vehicles with larger waste compactor vehicles, resulting in many benefits. While Agruni could not entirely prevent waste falling off the old open trucks during transportation, the new vehicles have a closing system that locks the waste and odors inside the vehicle. This contributes to decreased street littering, air pollution and other health-related hazards along the vehicles’ routes. Additionally, the new vehicles’ waste compacting function allows increased efficiency, with less time and fuel required to drive back and forth to the municipal waste disposal site, located outside the Kigali city limits. Agruni used a portion of BPI EA’s loan to finance three used waste compactor vehicles.

IMPROVING RECYCLING PRACTICES
Agruni’s commitment to waste collection is part of an integrated approach which includes improved recycling and management of the waste once it has been collected. In the past, the waste collected was transported to the municipal waste disposal site where it was simply dumped. Agruni now sorts the collected waste into biodegradable and non-biodegradable categories, and further separates recyclable materials from the non-biodegradable waste. By taking these measures, Agruni is not only able to reduce landfill, but also to create value out of what would otherwise be considered waste. For example, one of Agruni’s sister companies recycles the plastic waste to produce chairs and tables. With the biodegradable waste, Agruni creates a natural fertilizer which is in high demand due to the preference for non-chemical fertilizers. Recycling waste supports environmental sustainability by reducing the amount of waste that is finally stored in landfills; landfills can be related to environmental degradation due to the GHG emissions diffused by the decomposing waste, waste leaching and surface runoff.

Agruni has used a portion of BPI EA’s loan to purchase a sorting machine from Belgium, which will be located at the municipal waste disposal site for the operation by Agruni staff. The new sorting machine will have the capacity to sort through 1,800 tonnes of waste per day, separating recyclable materials and increasing the efficiency of the current operations. In addition, due to the increased capacity, Agruni will be able to process waste from other collection companies as well. The sorting machine will be the only one of its kind in Rwanda, and the staff has begun to receive training for operating it. The additional deliveries from Agruni’s competitors will naturally provide a larger amount of materials to be recycled, including the biodegradable waste. To make the best use of this, Agruni is working towards implementing a biogas plant. The gas produced will be used for cooking by the neighboring comm harunity, instead of the currently used coal which can be more harmful for the health and is more harmful for the environment.

IMPROVING THE COUNTRY’S PRACTICES
Agruni’s mission is directly in line with Rwanda’s own development goals, one pillar of which is infrastructure development, which specifically addresses waste management, the overarching goal being the protection of the environment. Rwanda’s objective is to establish adequate waste disposal systems covering all rural and urban areas, and Agruni is directly contributing towards this with its integrated approach. Addressing waste management in Rwanda, the Prime Minister Edouard Ngirente said: “Strong measures are needed for adequate and sustainable development of this critical sector of human existence and well-being”. Agruni’s alignment with the country’s development goals allows it to directly support the government’s agenda for the sustainable growth and development of Rwanda.

The provision of waste collection services is labor-intensive and Agruni offers new job opportunities for a growing number of people. Employees with various levels of skills are employed by Agruni, and the different tasks required across the company allow Agruni to employ both skilled and non-skilled workers. Tasks ranging from waste collection, sorting, and fee collection provide employment for more than 220 employees, 55% of which are women.

In its provision of formal jobs in an economy where informality prevails, Agruni is offering employment conditions which take the rights of the employees into account. This includes a formalized contract, personalized protective equipment (PPE), and a decent wage paid in a timely manner. In addition, Agruni offers multiple benefits for its employees. Some of these are the standard requirements under the RURA licensing agreements, but all contribute to the increased quality and stability of the employees’ jobs. Medical insurance is provided to all employees, as well as training for the positions as needed. Currently Agruni is working on expanding its employee benefits to include employer-subsidized accommodation.

Agruni is an essential part of the communities where it is active, not only due to its waste collection activities, but also due to its contribution via associated activities. For example, Agruni has and continues to work to educate the public on waste management. The steps that can be taken at a household level in this area can make a huge difference on the additional work required by the company after collection. Agruni hopes that the new sorting facility at the waste disposal site will further increase the value of the prior household sorting. Once respective findings can be shared with the communities, experience has shown that support will grow, and further actions will be taken at household level.

As part of its reach to the local communities, the employees of Agruni lead by example in their participation in the monthly nationwide clean-up day “Umuganda”. In addition, during 2017 Agruni covered the medical insurance cost for 1,000 people and collected waste free of charge for low-income people.

Business Partners International East Africa (BPI EA) is a perpetual investment vehicle providing risk-finance to small enterprises in Kenya, Rwanda and Uganda. BPI EA’s offering is tailored to the needs of small enterprises, accounting for their lack of collateral,and irregular cash-flows. With its nascent SME market, Rwanda has a growing need for the formalization of its businesses and their processes. Without formal processes, a small company will not be eligible to receive financing from a traditional bank,nor will it be able to grow sustainably. BPI EA offers financial products which are more flexible and tailored to the needs of SME clients than those of traditional banks and is also involved in supporting its clients in implementing good business practices.These include adequate audit standards, clear responsibilities for employees, good corporate governance, and best practice HR policies (including rules and regulations on remuneration, leave management, working hours, and holidays). BPI EA complements its finance with technical assistance (TA) in the form of non interest-bearing loans in order to support the improvement of the business capacities of the enterprises.

Agruni’s loan from BPI EA has been used to purchase three used compactor waste collection vehicles, as well as the sorting machine for the Kigali municipal waste disposal site. BPI EA supported Agruni with TA funding for a staff training program on the operation of the waste sorting machine for four employees at the manufacturing site in Belgium. This training ensures that the staff have the capacity to install and operate the machinery safely and efficiently and are able to train the other employees on-site.